Duing IGN’s Comic-Con 2018 live show, Glass director M. Night Shyamalan discussed how this Unbreakable sequel came to be and that he’d been planning it for a very long time.

“When I made Unbreakable, I kind of intended to do three movies.” Shyamalan explained. “Just in my head, I was thinking to do that. It was just such a weird reaction to the movie…It wasn’t received well, at the time. I just felt hurt, so I moved on.”

You can watch the full interview here:

He further explained how Unbreakable grew a cult following since its release in 2000 and he soon found his way to return to this universe.

There are so many Marvel shows either currently airing or in development that it’s sometimes hard to keep track of them all. But one of the best of 2018 so far is Cloak and Dagger, which premiered on Freeform in June. It was announced at San Diego Comic-Con that the show has been greenlit for a second season.

There are just two episodes left in Season 1, so this is great news for the show’s many fans. At the SDCC Cloak and Dagger panel, Marvel TV boss Jeph Loeb confirmed that Season 2 will start production in the fall, so expect it to hit screens in 2019.

Cloak and Dagger features former Disney star Olivia Holt (Ultimate Spider-Man) as Tandy Bowen (aka Dagger), and Aubrey Joseph (Run All Night) as Tyrone Johnson (aka Cloak). It focuses on two superpowered teens who have contrasting powers–Cloak controls the power of darkness, while Dagger throws deadly blades of pure light.

Cloak and Dagger were created by Bill Mantlo and Ed Hannigan, and first appeared in a 1982 issue of The Spectacular Spider-Man. A successful four-issue limited series was followed by an ongoing bi-monthly comic book in 1985, and the characters have appeared in a variety of titles over the decades. For more check out our guide to everything you should know about Cloak and Dagger.

In related news, it has been confirmed that the Marvel Netflix show Iron Fist will return to the streaming service on September 7. The action-packed first trailer for Iron Fist Season 2 was revealed at SDCC.

Voltron: Legendary Defender is Netflix’s update of the classic animated sci-fi show Voltron, and the seventh season is due to hit the streaming service on August 10. The show featured at San Diego Comic-Con, where a new trailer for the upcoming seventh season was revealed.

The trailer shows that the Defenders are returning to Earth with the hopes of rebuilding the Castle of Lions, which was destroyed in the last season. It’s packed with the same mix of action, drama, and nostalgic callbacks to the classic Voltron that has made the previous six seasons so popular. Check it out above.

The Voltron: Legendary Defender SDCC panel had both good news and bad news for fans. It was confirmed that Season 7 will return the show to 13 episodes, following much shorter runs for Seasons 3 to 6. Sadly however, it was also revealed that this is to be the penultimate season. Season 8, which is expected in 2019, will end the entire show, so fans have just 26 more episodes to enjoy.

Voltron fans attending SDCC also have the chance to buy a huge Lego figure based on the show. This is Lego’s biggest “buildable” action figure to date, coming in at 2,321 pieces, and has a price point to match, with the set costing a hefty $180. Fans can also buy the Voltron figure online from August 1.

Voltron: Legendary Defender was the first show released following the deal struck between Netflix and DreamWorks Animation late in 2015. The original Voltron was a Japanese and American co-production that ran for three seasons between 1984 and 1986. It proved hugely popular, spawning spinoff shows, comic books, and video games.

AMC’s Preacher is one of the wildest comic book adaptations ever made, and the craziness is set to continue if the latest trailer is anything to go by. We’re already four episodes into Preacher Season 3, but fans at San Diego-Comic Con were given a look at what to expect from the rest of the season.

The latest promo gives us a new looks at the revolting, powerful Allfather and the 350-year-old vampire Eccarius, Hitler working in a diner, and plenty of snappy dialogue from main characters Tulip (Ruth Negga) and Jesse (Dominic Cooper). Check it out above.

At the Preacher SDCC panel, executive producer Seth Rogan was asked about Allfather, the head of the powerful organization known as the Grail. It sounds like there’s some disgusting scenes in store during the rest of the season. “He has a little wand to stick down his throat to make him throw up sometimes,” he said, via CBR. “There’s a scene where they eat a horse. It was one of our favorite characters from the comics and is truly just a bizarre character and we hope to make good on that promise.”

Preacher was created by Garth Ennis and Steve Dillon, and first published in 1995 by the DC imprint Vertigo to huge acclaim. It ran for a total of 75 issues, including several one-off specials and a limited series.

Preacher Season 3 continues this Sunday, July 22, with an episode titled “The Coffin.” It runs until August 24. 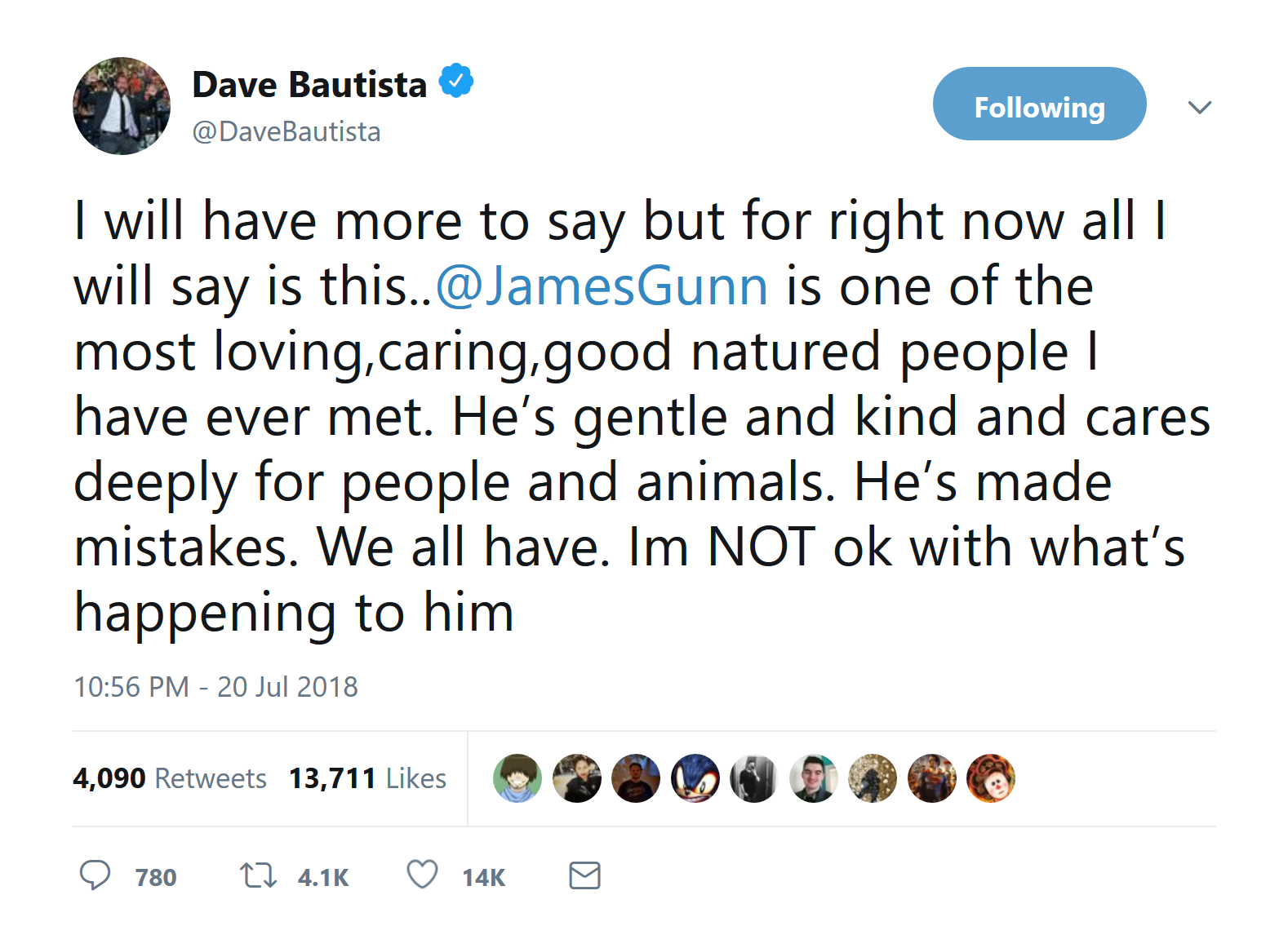 Superman isn’t the only DC hero to go back to his classic look in 2018. Batman will also be returning to his pre-New 52 costume, trunks and all. 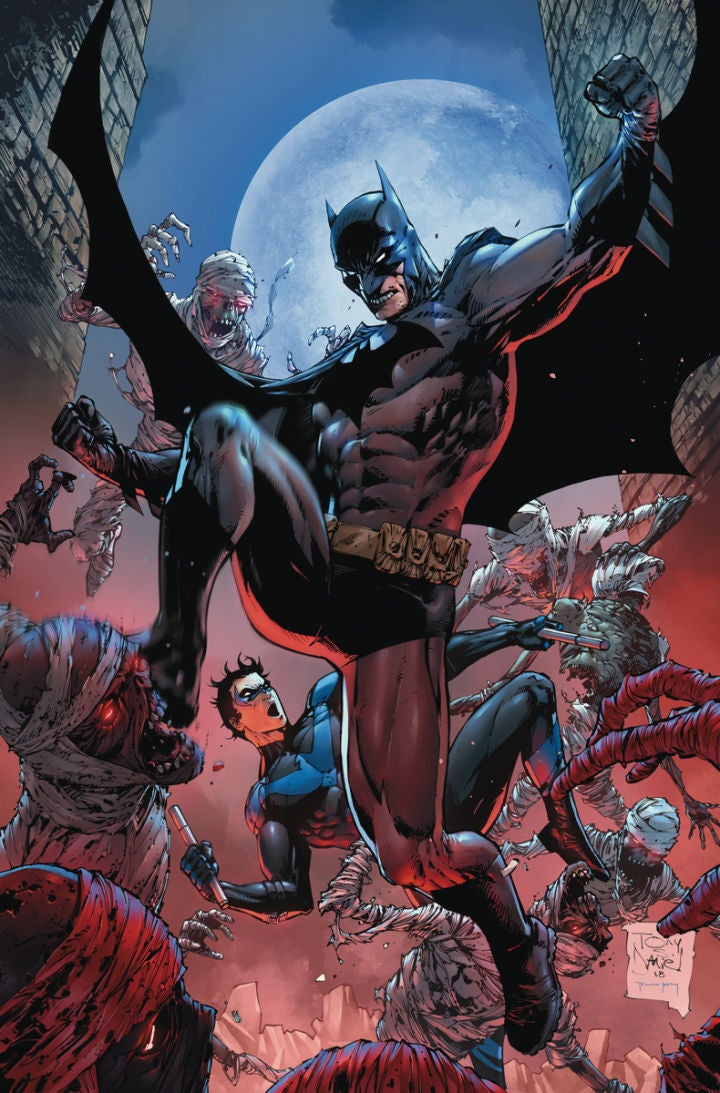 That news came during DC Comics’ Batman Family panel today. Batman writer Tom King revealed that the wardrobe change happens in Batman #53 next month. There the Caped Crusader will dust off his early 2000’s costume, made famous by stories like Hush. As King explained, Batman’s need to move on from his failed relationship with Catwoman compels him to make the switch. It appears that the days of the DC Rebirth Batman costume are done.

Split’s Anya Taylor-Joy returns as Casey Cooke, a survivor of The Beast, and returning Unbreakable cast members include Spencer Treat Clark and Charlayne Woodard as Dunn’s son and Price’s mother, respectively. American Horror Story’s Sarah Paulson rounds out the cast as a shrink who treats Dunn, Price and Crumb.

Joss Whedon and 20th Century Fox are developing a TV reboot of Buffy the Vampire Slayer.

THR reports Monica Owusu-Breen has been hired to write the script for the remake, with Whedon executive producing and working with Owusu-Breen on the screenplay. The pair worked together on Agents of SHIELD.

A black actress will play the lead role of Buffy, though there’s no word yet on official casting. This new take will reportedly build on the mythology of the original while being contemporary.

Gail Berman, Joe Earley, and Fran and Kaz Kazui (the producers behind the original series) will executive produce alongside Whedon. A network is not attached yet, and there’s also no word yet on who’ll be directing the reboot.

Oscar, Golden Globe and Emmy Award-winning actress, Frances McDormand will lend her voice to the six-part Amazon series as “the voice of God.”

The news was announced Friday during Amazon’s panel at San Diego Comic-Con. The apocalyptic drama is based on Neil Gaiman and Terry Pratchett’s 1990 novel of the same name. Douglas Mackinnon, known for Sherlock and Doctor Who will be directing.

Amazon describes the series as, “The End of the World is coming, which means a fussy Angel and a loose-living Demon who’ve become overly fond of life on Earth are forced to form an unlikely alliance to stop Armageddon. But they have lost the Antichrist, an 11-year-old boy unaware he’s meant to bring upon the end of days, forcing them to embark on an adventure to find him and save the world before it’s too late.”

The upcoming sequel-reboot sees the return of Curtis as Laurie Strode in what is promised to be her final confrontation with her masked and murderous nemesis, as the film forgoes all of the Halloween franchise’s continuity after the original 1978 classic directed by John Carpenter. Director/co-writer David Gordon Green (co-writer Danny McBride couldn’t make it) hit SDCC today to talk about his hopes and dreams (and nightmares) for this new Halloween.