Metal Gear Survive’s first beta took place back in January on PS4 and Xbox One, and let players drop into two maps with three missions for co-op mode. Konami has announced a second beta, to take place over the weekend of February 16, and this time, PC players have been invited to the party.

You can join the fray when the beta kicks off on PC, PS4, and Xbox One, on February 16. It wraps up on February 18.

As with the last beta, there will be three missions across two maps in co-op mode that can support up to four players online. Special daily missions will also be available.

Players can earn an in-game bonus for the full release once they’ve created their character. As with the last beta, the participation rewards are a FOX HOUND name plate, a Metal Gear Rex head accessory, and a bandanna accessory.

Since the release of the Switch in March last year, Nintendo has released some big hits when it comes to first party games. But as well as big name franchises like Mario and Zelda, the eShop is fit to bursting with indie titles and ports that are perfect for the home console/ handheld hybrid. In fact, as of December, the Switch had three times as many games as the Wii U did at the same point after its own release, and double that of the Wii.

Kotaku crunched the numbers based on data from Metacritic, and their analysis shows that both the Wii U and the Wii had a fairly lethargic release rate, whereas the Switch has a significantly more sprightly output by comparison.

Need For Speed Payback’s Nissan Skyline 2000 GTR should have rolled out in December’s update as part of the new Abandoned Cars feature, but was delayed due to a bug. This wasn’t met with much understanding, and the developers have addressed the community’s ire, calling out inappropriate behavior, and responding to claims that the game is dead by assuring fans that “the active player base is healthy.”

Global Manager of Community Engagement, Ben “F8RGE” Walke took to Reddit to address multiple topics. The first of the Reddit posts is a hefty one, and while it recognises players’ passion, it goes on to say that “there is a line that shouldn’t be crossed, and some of the abuse that I’ve seen hurled around over the last 24hours or so is shocking.”

As sure as the hands on a clock tick forward, Warframe is getting another major update. This one is called Shrine of the Eidolon, and builds upon the open-world Plains of Eidolon area added late last year.

The biggest additions (literally) are two new hulking Eidolon to hunt down, the Gantulyst and the Hydrolyst. Both are larger and more difficult to take down than the original Teralyst, which was already a hefty challenge.

A vehicle called the Dargyn is also being added to the plains, which you can hijack from enemy Grineer and fly around on. It’s new ground for Warframe, and something I’m certainly interested in seeing developer Digital Extremes explore more.

Scroll down to check out our reviews for these and various other new releases, and be sure to let us know your favorite books of the week in the comments below.

The first teaser trailer for Sony’s Venom has arrived, coming the day after the studio unveiled the official teaser poster for the upcoming comic book adaptation. Check out the teaser trailer below:

The first official footage from the upcoming movie focuses heavily on Tom Hardy’s Eddie Brock and less so on story. Notably absent in the trailer is the Venom symbiote itself, though there are plenty of other Easter eggs and moments of note in the minute-long video. Stay tuned for our full trailer breakdown, coming later today.

Venom wrapped filming a couple of weeks ago, so chances are Venom isn’t present in this trailer simply because the footage of the iconic Marvel character wasn’t ready for the world to see — especially since the film still has plenty of post-production work in the months ahead before its October 5th release date. Still, the movie is leaning heavily on the symbiote for its marketing, with both the final shot of the teaser trailer and the teaser poster lingering on a minimalist version of Venom’s signature eyes on a black background.

The original Ni No Kuni remains one of the absolute best traditional JRPGs that the PlayStation 3 has to offer, so it’s no surprise that we were super stoked to hear that the sequel, Ni No Kuni 2: Revenant Kingdom, is just around the corner. While the incredibly-talented Studio Ghibli is no longer involved this time around, developer Level-5 has continually given us confidence that this follow-up is in good hands.

We got a chance to play about four hours of Revenant Kingdom, which included all manners of its new, incredibly expansive gameplay. Here are three major reasons why we’re excited for its March release.

As a director, when Clint Eastwood gets it right, he gets it really right but when he doesn’t, he really doesn’t. With The 15:17 to Paris, it’s a classic example of Eastwood dropping the ball, big time.

This biographical thriller is based on the autobiography The 15:17 to Paris: The True Story of a Terrorist, a Train, and Three American Soldiers by Jeffrey E. Stern, Spencer Stone, Anthony Sadler and Alek Skarlatos. It stars Stone, Sadler, and Skarlatos as themselves and reenacts their stopping the 2015 Thalys train attack. The decision for the trio to play themselves was really only ever going to go one of two ways, good or bad, and the way it has gone is really about as far away from the preferred option as possible. 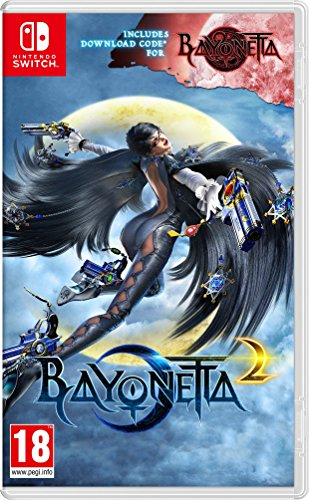 If you are an Amazon Prime member, you can grab the cheapest Bayonetta 2 preorder deal at Amazon, which is only £38.00. You will also get a download code for Bayonetta 1 for free.

Greetings true believers! A brand new trailer has dropped for the upcoming Deadpool sequel, and we went over it with MAXIMUM EFFORT to spot all the details you might’ve missed.

Check out all the Easter Eggs and geek morsels we uncovered in either the video above or the slideshow below!

That was everything that jumped out at us in the latest trailer for the STILL UNTITLED Deadpool sequel, which is out May 18th — what did we miss? More importantly, what do you think this movie’s actually going to be called?

Let us know in the comments, and if you want more obsessive attention to detail, let us break down the latest previews for Avengers: Infinity War and Solo: A Star Wars Story — and for all this summer’s big loud stupid movies, keep it right here on IGN.